The address you entered could not be validated. Would you prefer to edit and resubmit it, or submit it as is?

Keep as is
Edit

In creating an ASAP, you’re opting to automatically order this product each month. You’ll receive a saving on all products added to your ASAP. We’ll fulfil your order on, or as close to your chosen date as possible.

Familiarise yourself with how our Automatic Shipping Advantage Programme works on our ordering page.

I agree
I disagree

Are you sure you would like to delete this item? This action is not undoable.

Are you sure you would like to delete this item? This action is not undoable.

In creating an ASAP, you’re opting to automatically order this product each month. You’ll receive a saving on all products added to your ASAP. We’ll fulfil your order on, or as close to your chosen date as possible.

Familiarise yourself with how our Automatic Shipping Advantage Programme works on our ordering page.

I agree
I disagree

An error occurred while saving your payment. Please try again.

The account number you entered is invalid. Please try again.

*PIN: This is your “Personal Identification Number” used when placing orders by phone, using our order form or online. You will also find it on your Lifeplus invoice. If you do not have a PIN or cannot remember it please contact our Customer Service team.

To add a new payment method, please be advised you will be required to provide the following:

To add a new payment method, please be advised you will be required to provide the following:

Are you sure you wish to delete this cart?

Please provide a name for your cart:

We need some help text copy for this section.

Onboard Site Is Active Help

We need some help text copy for this section.

Your Sponsor is the Lifeplus Member who referred you to Lifeplus. In turn, when others you refer to Lifeplus enroll as Members, you’ll become their Sponsor. Sponsorship can’t happen accidentally – new Members always have the choice of who to sign up with. If no one referred you to Lifeplus, we can help you find a Sponsor; simply leave this field blank to let us know you’d like our help. 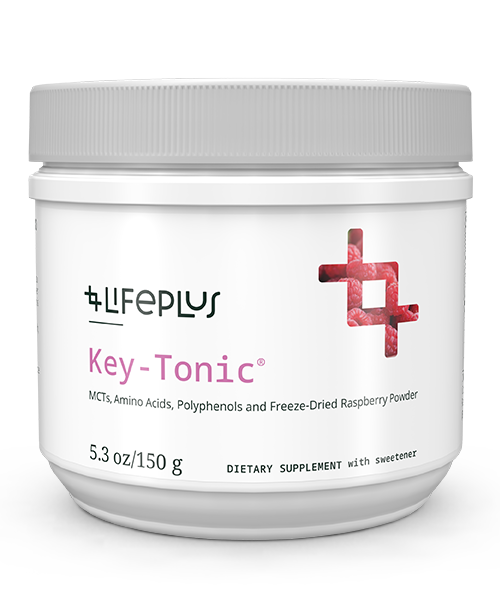 Routine fasting or caloric restriction has been consistently revealed as effective in supporting healthy aging by science in recent years. And, much of the benefit seen from fasting and caloric restriction is due to the body's ability to move into a state of nutritional ketosis, a metabolic state that allows the body to burn ketones in place of glucose. Ketosis supports healthy

Under normal circumstances, our bodies primarily use glucose as fuel. When carbohydrates are not readily available (such as in the case of prolonged fasting, carbohydrate restriction, or prolonged exercise), the body shifts to burning fat for fuel.

However, the brain and central nervous system can’t use fat for energy, and consequently, the body is forced to turn to an “alternate fuel source”—ketones. The liver creates ketones from fats via the process of ketogenesis, which are then released into the blood/plasma.

Ketogenesis is when your liver converts fatty acids into ketones so they can serve as an alternative fuel source throughout the body. This metabolic state is what’s known as being in ketosis.

However, the problem for many people in following this advice and either fasting, or restricting their calories for a period of time, has been the concerns of hunger, fatigue, and mental fogginess.

Supplementing with Lifeplus Key-Tonic can help you reach a ketogenic state without those concerns—making it much more comfortable and achievable for many.◊

Key-Tonic is a simple, yet synergistic, combination of coconut based high-C8 MCTs, essential amino acids, plant-based polyphenols, about a cup of coffee's worth of caffeine, a small amount of highly bioavailable B12, all finished with a bit of organic freeze-dried raspberry powder and stevia. And, while it is the synergy of this combination that makes it unique, each individual ingredient offers its own independent benefits.

Use Key-Tonic to add amino acids, polyphenols and nutrients to your current dietary program. Its inclusion of vitamin B12 means it can support you with clean and stable energy, mental clarity and a healthy immune system by contributing to:

The choice is yours. Whether you’re on a low-calorie diet or want to reach that boost of energy in a more sustained way, we invite you to try Key-Tonic to see how you enjoy it most!

◊These statements have not been evaluated by the Food and Drug Administration. This product is not intended to diagnose, treat, cure or prevent any disease.

ASAP stands for Automatic Shipment Advantage Program, but it’s usually referred to simply as ASAP. Once you join, you can save by bundling your products into a single monthly order. Since many of our products are packaged in one-month supplies, ASAP works for most Lifeplus customers. Of course, you can place other orders throughout the month, but the more you bundle, the more you’ll save.

When you participate in ASAP, you’ll get access to discounted product pricing. Plus, since you’ll automatically receive your ASAP order every month, you’ll never run out of your favorite wellness products. Easy to cancel, easy to change.

It helps the planet

Because it ultimately reduces the number of shipments we make, choosing ASAP is good for the planet too.

How does it work?

When you sign up for ASAP, your selected products will be automatically shipped each month on the date you choose. When the order is dispatched, we’ll charge your preferred payment method. ASAP participants can change or cancel automated orders up to three business days before the order is scheduled to ship.

To sign up when ordering through our online shopping cart, check “Make this ASAP” for each product you’d like to automatically receive every month. We’ll enroll you in the program so you can start enjoying the benefits immediately.

You can also participate by placing an order through our ASAP Management tool.

Once you receive delivery of your first ASAP order, you’ll be able to manage all your ASAP orders online. From there, you can add or remove products, change your preferred dispatch date, and update your payment information. Simply submit your changes and we’ll take care of the rest.

Short for International Points, IP serves as our customer loyalty program. Virtually every product is assigned an IP value, so each time you purchase our products, you’ll accumulate IP. In turn, you can use your earned IP on product purchases and other goodies. This is a new program, so look out for more details coming soon.

This content is available to Lifeplus business partners.
shgyu0/m/us/en

We use cookies to collect and analyze site usage, and to give you the best possible user experience.